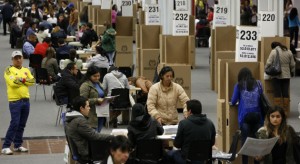 Today Colombians exercise their right to vote in order to elect their next president. There are five politicians who aspire to govern Colombia.

The latest poll showed a tie between the president – candidate Juan Manuel Santos, from the National Unity Coalition and Oscar Ivan Zuluaga, from Uribe´s National Unity Democratic Center. Zuluaga would have the 29.5% and Santos the 28.5%, according to the poll published by the magazine Semana.

There would also be a tie between the left-winger Clara Lopez, from the Alternative Democratic Pole (10.1% ); Marta Lucia Ramirez , from the Conservative Party (9.7% ); and Enrique Peñalosa , from the Green Alliance ( 9.4%).

Confirmed these projections, there will be a runoff on June 15. But the impact of the scandal, over the accusation that Zuluaga is linked to the hacker Andrés Sepúlveda, will be seen in the electorate.

The dialogue with the FARC was executed from November 2012 in Havana. These conversations have achieved agreements on land, political participation and illicit drugs. However, there are still issues to be addressed and will be completed in the next president term, a reason why the outcome of these elections will be crucial for the negotiations with the FARC.

Applicants say they are willing to follow the process but, with the exception of Santos, others have raised the need for changes in the conditions in which they trade.