Prince William and Kate Will Star in a Comic 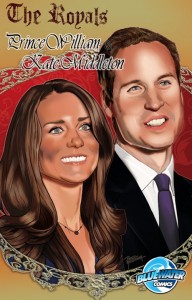 The cartoonist Rich Johnston, known in the world of comic illustration for its political content comics, was responsible for writing the script for “Kate and William: A Very Public Love Story”.

Mike Collins and Gary Erskine, two well-known artists in United Kingdom, will be the illustrators of the work, which will be divided into two parts, one focused on the prince’s life and the other one in Kate’s.

The first two parts of the comic will be available for sale since April 2nd, four weeks before the wedding.
In the future, a third book will be released, it will show the common life of the eldest son of Prince Charles and Lady Di.

“The comics have much to offer as support, but they are dismissed too often as somewhat juvenile,” said Johnston, who said his main motivation for accepting this work was to “expose comics to a wider audience.”
A U.S. version of the comic, titled “The Royals: Prince William and Kate Middleton, will also be available in April.