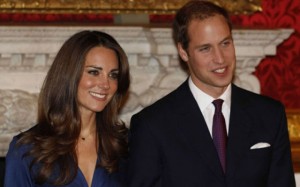 Prince William, second in succession to the throne of England, made his commitment to his girlfriend Kate Middleton public. The couple has been together for eight years.

William and Kate met while attending St. Andrews University in Scotland in 2001.
Last month, William decided to propose to his girlfriend. The prince popped the question during a romantic getaway with Kate in Kenya, he gave her a blue sapphire ring surrounded by diamonds—which is valued at $ 44,000 and is the same one his father gave Diana when they got engaged— “It’s very special for me, and Kate is very special to me now so I wanted to join those two, “said William, who is to receive a duke title soon—Kate would become duchess—. “I want to make sure my mother doesn’t miss anything today, I’m excited about spending our lives together,” said the prince.

Middleton described her boyfriend’s proposal as “very romantic”. “We’ve been dating for so long … it is natural for both of us to take this next step”.
Kate and William’s engagement was kept a secret, only the bride’s father, Michael, knew about the news, because according to the royal rules, William asked his daughter’s hand in marriage, and requested authorization from the queen.
The brothers and sisters of the couple learned the engagement news only hours before it was made public.

“I am delighted my brother finally popped the question. It means I get a sister and I’ve always wanted a sister,” said Harry, William’s younger brother.
“I’m thrilled, they’ve been practicing long enough,” said the Prince of Wales while joking.
The cottage in Anglesey, which the Prince has been renting for several months near RAF Valley, will become the first home of the couple, where William will begin a tour of three years of service as a helicopter pilot search and rescue.

“I look forward to spending my time with William,” said the excited bride. “She’s very good with flattery,” said the prince.
The couple will celebrate their wedding next year, according to a statement, it will take place in spring or summer of 2011 in London and will coincide with the 30th anniversary of his parents’ wedding, Princess Diana Spencer and Prince Charles, who got married in 1981.