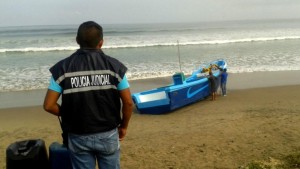 The artisanal fisheries sector of the Manabi Puerto Lopez, Manta, Jaramijo, Jama and Pedernales counties is concerned. In less than a week, more than 20 fishermen found with about four tons of cocaine have been arrested in national and international waters.

The arrests were executed between 16 and 20 March. Most detainees are from Manta and Jaramijo.

The latest arrest took place on Sunday, between the province of Esmeraldas (Ecuador) and Colombia. 1.7 tons of cocaine were seized in two fiber boats with the Manta registration number. Five people were imprisoned, four Colombians and one Ecuadorian.