Private taxis apply the rate that yellow ones reject 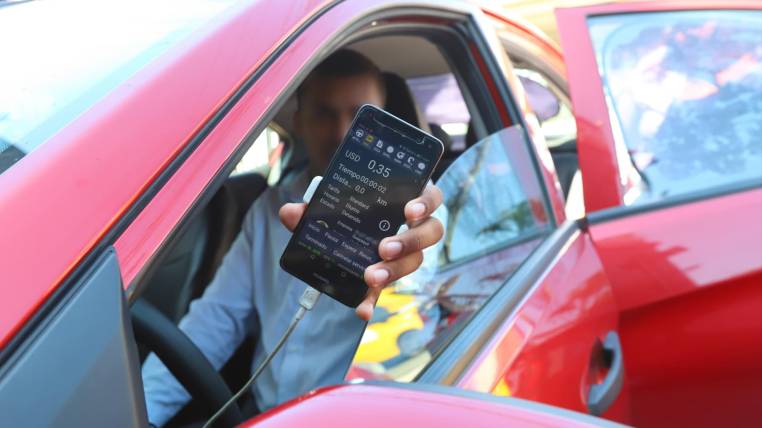 In the struggle to achieve profitability for the pocket of the private taxis (known as executive) and the yellows, both guilds have adapted independently to the lack of revision of the tariff that has been valid for 15 years.

In that sense, the executives have opted for the use of telephone applications, which simulate a start of $ 0.35 equal to the taximeter approved by the National Transit Agency (ANT) stipulated in the Traffic Law, that the yellow taxis refuses to use.

To make a comparison of the services, EXPRESO did some interviews and four tours with both services, with short and long journeys.

At 10:30 on Wednesday, on the first trip in a private taxi, with air conditioning, and clean cabin, which departed from the facilities of this newspaper, located on Avenida Carlos Julio Arosemena km 2.5 to the offices of Interagua , in Lomas de Urdesa (Dr. Enrique Olmos and Los Olmos), the app taximeter marked a value of $ 1.89 (rounded in $ 2). While, on the same route, but without air conditioning, and with little cleaning, the driver of a conventional taxi verbally agreed to the race in $ 3.

The drivers of a private taxi company, who reserved their name, and of their company “for fear of reprisals”, agreed that their work, in spite of the collection with an app taximeter, leaves them good profits. “Rolling all day I make about $ 70 a day,” explained one.

On the side of drivers of yellow vehicles, the taxi driver Walter Mendoza reaffirmed the non-use of the meter for the outdated rate with which it works. “Working for 6 to 8 hours, I get about $ 25,” he said.

Although the start of the homologated taximeter coincides with that of the application, the mileage does make a difference of $ 0.40 for the executives, and $ 0.26 in the yellows.

For the expert in transport and mobility, Carlos Salvatierra, the profitability is not only measured in the collection or number of races, but there are some determining factors in the profit. The information in the box is referential, and was based on the statements of the workers of both companies.

Following the route, at 13:40, on the long journey, from this newspaper to the Mall del Sur, located on Avenida 25 de Julio and Dr. Ernesto Albán Avenue, the race in the private marked $ 4.10. While in the yellow, two drivers offered the race in $ 6. Also, the travel conditions did not vary from those described above.

Salvatierra continues his explanation, arguing that the non-use of air conditioning is related to the cost of fuel. “It has been shown that those who do not use air conditioning recover $ 1 of every $ 5 charged at the gas station,” he explains.

Buster Maldonado, leader of the yellow force, argued that if they were compared with taxi drivers who use these applications with different mileage, they are at a disadvantage.

While a private administrator, who did not disclose his name, said that the rate they use “marks a fair value with users and drivers.”

Finally, the transport expert called on the yellow taxi drivers to use the technology in their favor. And universities to generate studies on the costs of operating taxis, which serve as a basis to mark fair rates. (I)

Diana Salazar: “The private accusation of the UAFE is with a view to confiscation”