Pro-Russian militia will leave Ukraine after agreement with Russia 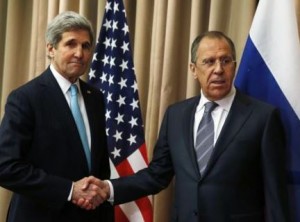 Despite all the uncertainties around the desire for dialogue, the U.S. State Secretary, John Kerry, and the High Representative for the European  Foreign Policy, Catherine Ashton, have reached an agreement between Russia and Ukraine to end violence.

The commitment forces Moscow to facilitate the disarmament of pro-Russian militias in eastern Ukraine and in return, Kiev will prepare a constitution that enshrines the federal organization of the country and the respect for all minorities.

This achievement, which still  needs to be refined, represents more than the parts predicted, even during the hours that the four leaders (Kerry and Ashton plus Russian Foreign Minister Sergey Lavrov and his Ukrainian counterpart, Andrei Deshchytsia) were gathered in Geneva.

“This agreement will only make sense if we act. The work will not be done until this agreement is implemented,” said Kerry, knowing that political commitment does not guarantee the actions taking.