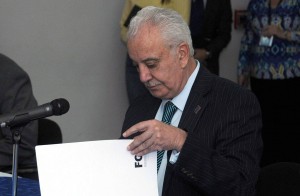 The prohibition to leave the country and preventive detention was the decision the Court of the Criminal Chamber of the National Court adopted yesterday against eight people the Prosecution linked to the case that investigates the alleged extrajudicial execution of Amada Suarez, adoptive mother of John Fernando Hermosa, teenager who was charged with the murder of taxi drivers in the 90s.

Lenin, Jorge Z. and Efrain R., all former officials who held high positions in the police in 1992, a year in which the alleged offense would have been committed, and Felicísimo A., second police commissioner at the time, received the precautionary measure of not leaving the country.