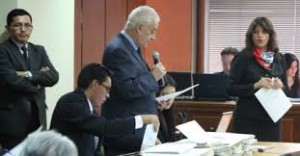 During the hearing of formulation of charges in the national court of Justice, the Attorney general, Galo Chiriboga, requested on Monday remanded for five persons involved in irregular delivery of a Cofiec credit of $800,000 to the argentine Gastón Duzac.

The defendants are Pedro Delgado, former President of the Board of Directors of the Central Bank and legal representative of the management unit of public law (Ugedep); Gastón Duzac, beneficiary of the credit, and the other three involved F. E., A. B. and P. Z…

Prosecutor Chiriboga said that against the involved there is evidence of the Commission of an offence against the public administration, so he asked the prison “in order to ensure their appearance in the criminal process and because it is a case that caused national commotion”.

Hours before the hearing, the Prosecutor’s Office reported that F. E., was arrested at the airport of Tababela. When trying to leave the country in a Copa flight, bound for Panama.

For the other 12 defendants, the official requested measures precautionary alternatives, such as the ban on exit from the country and the sale of goods.