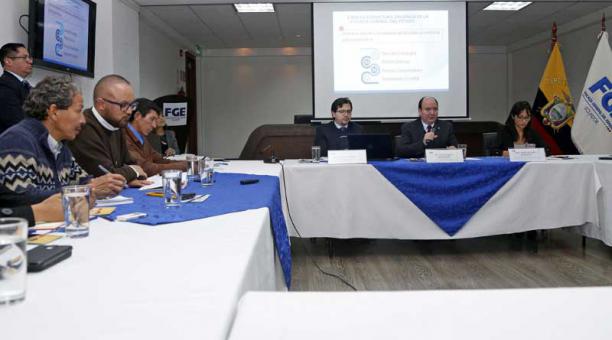 New details were revealed this Tuesday, January 9, 2018, around the investigation of corruption in the country. While announcing how the investigations will be strengthened, the Office of the Prosecutor confirmed that only 29 cases are open in the Odebrecht case.

This and the other processes are part of 156 cases that, due to their delicacy and complexity, the Prosecutor’s Office has identified as “emblematic”. To solve them, he created two specialized groups. One of these will be in charge, for example, of corruption issues.

For this, 11 prosecutors were appointed and analysts were included in oil, insurance, financial crimes, public procurement and others. In fact, in the research on the advance sale of oil to Petrotailandia and Petrochina, this type of specialists is still required.

The case was opened in the administration of Galo Chiriboga and his inquiry is still reserved. That is, information is collected and potential suspects have not been identified. This case was resumed on Monday, after the Comptroller’s Office announced a “veeduría” (observers) for the management of the public debt.

For the sale of oil to China and Thailand, the State invoiced USD 40 510 million between 2009 and 2015. In that negotiation, former President Rafael Correa is mentioned. Yesterday, Attorney Carlos Baca said he will call him to give his version if necessary. “I do not rule out the possibility that the former president may be called to testify in any investigation or in several investigations.” Among the “emblematic” issues are eight cases related to the Strategic Sectors. Researchers analyze mega projects, such as hydroelectric plants, irrigation systems, oil fields, etc.

The crimes that would have been committed are: illicit enrichment, embezzlement, bribery and others. Baca assures that in this group there are not only senior officials investigated, but also servers of all levels. Within the plan of the Office of the Prosecutor to fight the fight against corruption and organized crime, it proposed a Law of Extinction of Domain, so that the illegal assets come into the power of the Ecuadorian State. Bolivia, Colombia, El Salvador, Guatemala, Honduras, Mexico and Peru already have similar regulations

In Ecuador, the project is in the Assembly. One of the proposals is for the State to recover the money or property resulting from corruption or crime that is outside the country. Organized crime and violent deaths Among the “emblematic” cases that the Prosecutor’s Office will prioritize are migrant trafficking, rape, usurpation, torture, homicide, murder, robbery with death, femicide, etc.

This last offense increased between 2015, 2016 and 2017. From 55 events it went to 69 and last year it closed with 109 attacks. The Cedhu already warned that violence against women is becoming more acute. He said that the victims are strangled or attacked even after losing their lives. International mafias are also worrying. This week, the Office of the Prosecutor will create an Organized Crime Unit, which will be focused on confronting these illegal networks. T

at department will be headed by the prosecutor Wilson Toainga, who until last year participated in the investigation against Jorge Glas. They will be prosecutors, who must pass, for example, the confidence tests, such as the lie detector and the analysis of their assets.

During the past year, the Police confirmed that it had dismantled 263 criminal organizations made up of 1,946 people, who are now in prison. They are investigated for drug trafficking, drug trafficking and hydrocarbons. (I)