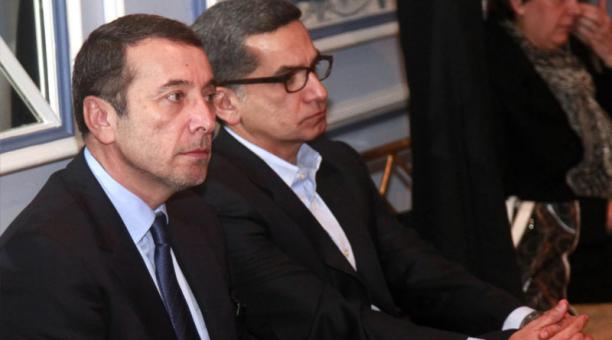 The Office of the Prosecutor opened an inquiry on Wednesday, January 31, 2018 after confirming the receipt of report ROII 2018-003 of the Financial Analysis Unit (UAFE). This document details “unusual and unjustified” financial movements in accounts and companies related to the brothers Fernando and Vinicio Alvarado.

That report was released Tuesday night by Teleamazonas and the news program of Ecuador TV and Gamavisión. The Prosecutor’s Office said that the document had arrived last Friday and that yesterday it entered the office of Attorney General Carlos Baca Mancheno. “These technical documents are issued and sent in a sealed envelope and in a reserved manner, precisely to facilitate the progress of investigations into possible criminal offenses,” the entity reported in the afternoon.

The document details, for example, how the income declared by the Alvarado ex-ministers is not related to the sums of money that were entered in their accounts during the last decade. The details of these accreditations in the national financial system reveal that Fernando and Vinicio Alvarado, their wives and the companies Creacional and Arkae recorded revenues of USD 161.3 million from 2010 to 2017.

In those years, Vinicio Alvarado was secretary general of the Presidency, secretary of the Public Administration and was Minister of Tourism and head of the Ministry Coordinator of Production. During this period, only Vinicio Alvarado received deposits and transfers for USD 1.4 million. Almost half corresponds to their remuneration as a public official.

The year that received the most income was 2013, when he left the Administration Secretariat and went to Tourism. According to the UAFE, in 2013 it received half a million dollars. However, the Internal Revenue Service reported revenues of USD 288 278. This meant an increase in its income compared to what it had obtained in previous years and that has not been justified, the entity points out.

The UAFE reveals that at the time Alvarado headed the Minister of Tourism, his daughter was “the executive producer of All you need is Ecuador.” This was a tourist advertising campaign that had a budget of 19 million. UAFE researchers also pointed out that the company Creacional, in which Vinicio Alvarado is the owner of 98.5% of the share package, obtained payments from state companies such as Gamatv, TC and Gamavisión for USD 446 787. This occurred despite the fact that The Organic Law on Public Procurement (articles 62 and 63) prohibits state companies from contracting with public officials or their direct or distant relatives.

In the last decade Creacional obtained revenues of USD 155.7 million. The Odebrecht construction company is one of its main clients. Between 2013 and 2016 the Brazilian firm, investigated by the courts, transferred almost half a million. Another client is Televisión Satelital, Ricardo Rivera, uncle of former Vice President Jorge Glas, who is now sentenced for illicit association.

The channel paid USD 90 643 to Creacional, between 2013 and 2016. A detail that highlights the UAFE is that between 2010 and 20017, this firm paid one million in checks to two of its employees. The report emphasizes that the salaries of a decade of these employees do not reach USD 20 000 and that none was registered as a supplier of Creacional. In a statement, Vinicio Alvarado said on Tuesday that “there is nothing irregular” in the billing regarding your company. “Have the absolute certainty that you will never find an improper act in relation to my functions, which have already been audited and can be repeated as many times as necessary …”. For Alvarado, the report of the UAFE is “an immoral act of persecution”.

And he clarified that the Financial Analysis Unit has not asked for “any data”. Regarding Fernando Alvarado, the UAFE indicates that in the last decade he registered an income of USD 808 199. Almost half was for salaries he received in his positions as adviser to the Presidency, Secretary of Communication and Minister of Tourism. His income tax statements were for USD 495,560, but these also do not relate the sums of money he received in his accounts for USD 634 626, according to the UAFE.

That same document mentions his wife and children. About the couple, it is said that they presented income to the SRI for USD 25 173 in 10 years. But in that time the income and transfers to their bank accounts totaled a quarter of a million dollars; the difference has not been justified.

On the two sons of Fernando Alvarado, the UAFE explains that they received payments from Vialmesa in 2015 and in 2016.

In the tracking of this company, the researchers detected that one of its shareholders and founders did not present their taxes in a decade, because their annual income was low. However, the firm obtained payments of USD 326 252 from the state newspaper El telegrafo. (I)