A large group of people gathered from approximately 17:00 on Wednesday, October 16, 2019, outside the headquarters of the Embassy of Mexico in Ecuador, located between the avenues December 6 and the United Nations, in the north of Quito

The citizen’s call was made through the social networks Facebook and Twitter, so that people approach the diplomatic legation of the Government of Mexico to request that asylum be granted to the assembly members: Gabriela Rivadeneira, Soledad Buendía and Carlos Viteri Gualinga, an alternate legislator and an official of the Pichincha Prefecture. 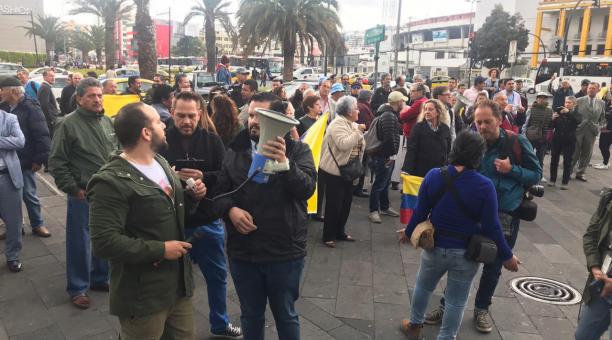 The Mexican Embassy reported on Monday, October 14, in a statement, that the Assembly members of the correísmo Luis Fernando Molina (national alternate legislator), Soledad Buendía (national parliamentarian) and their spouse Edwin Jarrín, Carlos Viteri (parliamentarian) entered their headquarters in Quito national) and his spouse Tania Pauker; and Leonidas Moreno, official of the Prefecture of Pichincha.

Edwin Jarrín and Tania Pauker were advisers to the Citizen Participation and Social Control Council (Cpccs), appointed under the Rafael Correa regime. Meanwhile, Leonidas Moreno is a trustee of the Prefecture of Pichincha.

The announcement of the Embassy was known hours after the Prosecutor and the Police arrested Paola Pabón, prefect of Pichincha, in Quito. This happened at a time when the Ecuadorian Justice opened investigations, to determine responsibilities for the violent protests that hit Ecuador during the last 11 days.

“Our country reiterates its commitment to respect, protection and promotion of the human rights of all people, regardless of their political affinity,” said the Ministry of Foreign Affairs (SRE) of Mexico in the statement issued on October 14.

The citizens shouted slogans against the assembly members, co-assistants of former President Rafael Correa and asked the Mexican Government not to accept them. People exhibited posters and stayed until late at night.

The participants of the plant were placed at the front of the building, on the side of United Nations Avenue. A group of police arrived at the scene and guarded the Mexican Embassy, ​​while people shouted slogans against the legislators of the self-styled ‘citizen revolution’ wing.