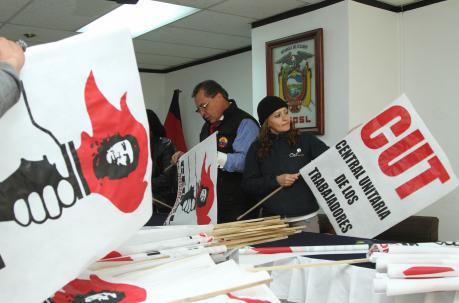 The United Workers Front (FUT) called for a “day of resistance” nationwide, which will be held today, Thursday, March 19. This, in response to what they consider “the onslaught of the homogenizing model” and that, according to them, is intended to eliminate the rights and achievements of workers.

Conaie; Ecuarunari; Ecuadorian Medical Federation; Popular Front; UNE; Cutae; Federation of Public Servants; Student´s sector (university and secondary); Professionals, neighborhood associations and citizens in general were convoked to the march. The peaceful march will initiate at 16:00in Quito, from the Social Security Headquarters up to the Plaza de San Francisco.

The concentration of the unions begin today at 15:00, in front of the Social Security Headquarters. The mobilization will move forward from El Ejido to the Plaza de San Francisco, at 16:00. There, the leaders will give their speeches to the attendees of the march.

The demands made by the group are related to: the labor policy of the regime, tariff safeguards, constitutional amendments, Executive Decree 16, the criminalization of social protest, oil exploitation of the ITT and the Land Act.

Patricio Pillajo, President of the Federation of Free Workers of Pichincha (Fetralpi for its Spanish acronym), said: “These are the same issues we have demanded since June, but we have not seen any change. more and more concerns have been only been added.”

The marches will be replicated in several capitals. Unions have been called in Guayaquil, Ibarra, Cuenca, Orellana and Portoviejo.