Protests Due Risings in Food and Transport Prices in Bolivia 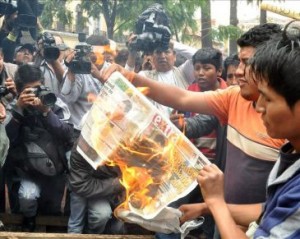 The main cities in Bolivia paralyzed today for several hours by demonstrators protesting because of the rising prices in food and transportation.

The influential Federation of Neighborhood Boards of El Alto called for the resignation of Teresa Morales, Minister of Production.

“Fair price” was the chorus of protesters from El Alto who descended to the center of LaPaz, Bolivia’s government headquarters, to demand the lowering of food prices and the supply of sugar imported from Colombia, Brazil and Peru.

“We demand toPresident Evo Morales to turn himself by the people’s side and do everything to bring prices down because since the frustrated ‘gasolinazo’ (rising of fuel) everything has gone up,” said Rubén Paz, president of the Federation of Neighborhood Boards of El Alto.

The leader of El Alto threatened to begin a protest in the second largest city in Bolivia in case they raise the fares of public transport.