Protests in favor and against the regime 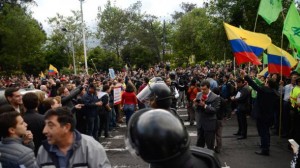 In the tribune of the Shyris (north of Quito), Alianza PAIS supporters arrived at 17:00, waving flags of Ecuador and their party organization. One hour later, another group with placards and shouts rejected the regime.

Some 250 policemen went to the Shyris Avenue and Holland Street to separate the participants in the protests and avoid quarrels. However, there was shoving and even an injured: Napoleon Pasquel, a supporter of the ruling party who showed a cut on his forehead and was taken to the headquarters of AP, in front of the grandstand, for treatment.

After 18:00, the number of people shouting against the government increased and demonstrators of the ruling party decreased. The traffic of the Shyris Avenue was diverted. After 21:00 there were still people on both sides who continued demonstrating.

In Guayaquil, supporters of the ruling party were summoned in the lower section of the Governor´s Office, from 16:00, to support the political project. Meanwhile, another group protested against with a walk through the 9 de Octubre Avenue with black and tricolor flags.