Protests in Mexico over missing students are resumed

Thousands of Mexican students and teachers resumed this Friday in Guerrero state (south) their strong protest against the government of Enrique Peña Nieto for the disappearance of 43 students, which this week resulted in fires in public buildings such as the local parliament.

With the pictures of the 43 students at the forefront, the manifestation of Chilpancingo, capital of Guerrero state, was led by some parents of the youth missing and possibly massacred the night of September 26 in Iguala (Guerrero), a crime that has sparked the worst presidential crisis for Peña Nieto.

Unlike the previous days, the protesters, some of them hooded, armed with sticks, pipes and helmets have not attacked any official or party building. On their way, they painted messages in stores: “Out with the drug government of Peña Nieto,” “43 are missing.”

A militant group seized cars from government institutions. Activists had previously announced their intention to seize the symbolic number of 43 vehicles and set them on fire. 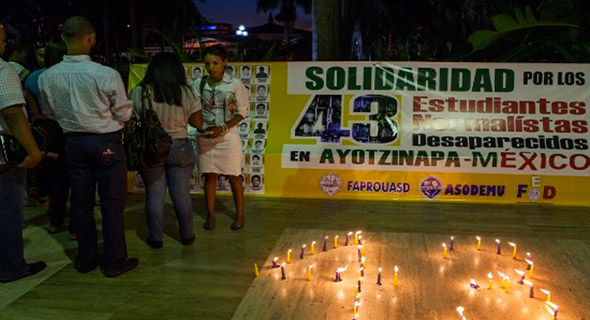