Provincial strike in Galapagos by law passed in the Assembly 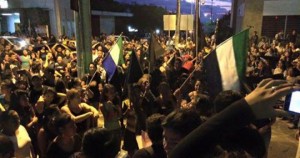 From 3:00 am of this Friday inhabitants of the Santa Cruz and San Cristobal islands began a preventive work stoppage to reject the Organic Law of Special Regime for Galapagos, which was ratified by the Assembly on Tuesday, so they declared in resistance.

Citizens’ assemblies will also be present to demand President Rafael Correa to repeal the law violates the rights of the Galapagos islanders.

Johnny Freire, president of the Vestry of the Floreana Island, said that businesses, maritime and land transport, and schools will be paralyzed until 10:00, time in which they will gather signatures to submit claim of unconstitutionality of the Act . at 11:00 the march will start through the main streets of both Santa Cruz and San Cristobal islands.