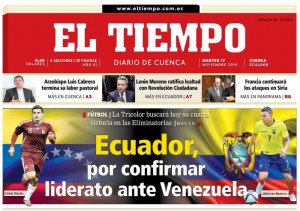 The Public Company El Telegrafo EP acquired 49% of the shares of the private company El Tiempo Cia. Ltd., which publishes the newspaper of the same name, and next year it will acquire the remaining 51%.

The news was reported yesterday by El Mercurio newspaper, which backed the information in documents of the Companies Registry of in Cuenca and the Ninth Notarial Office of that county.