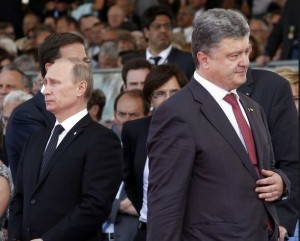 Russian President Vladimir Putin and Ukrainian Petro Poroshenko, had met this Tuesday in Minsk, the Belarusian capital, jointly with the European Union and experts on addressing the armed conflict in the eastern Ukrainian regions.

“We are willing to exchange views on the acute crisis in Ukraine, that according to our belief, can not be solved by scaling the use of force, without a political dialogue with their representatives,” said Putin.

Poroshenko, meanwhile, stressed that there will be no peace and stability in eastern Ukraine without effective border controls and has asked to stop the supply of arms to the rebels, be allowed the access of OSCE inspectors to the region and be released the prisoners of war as steps to achieve peace.

“At this meeting in Minsk the fate of the world and Europe is decided. So I see it,” said Poroshenko at the beginning of the meeting at the Palace of Independence in the Belarusian capital.

It is the first meeting at which the two leaders will coincide and it is not discarded the possibility to maintain a face-to-face at the appointment of Minsk.