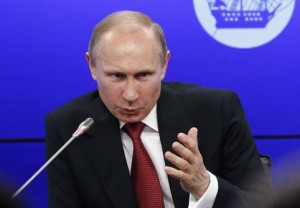 President Vladimir Putin announced that Russia will recognize the results of the presidential elections to be held in Ukraine next Sunday, while expressing hope that the new leader ends the military actions in the East of the country.

During a conference in St. Petersburg, Putin said that Russia “will respect the choice of the Ukrainian people” and will work with the new leaders.

He added that Russia wants that peace and order are restored in Ukraine.

“We are concerned that in our western borders, in our sister Ukraine, and I say this without irony, peace, order and tranquility could be established,” he reiterated.

Putin said he hopes that “all military actions are immediately suspended after the presidential elections.”