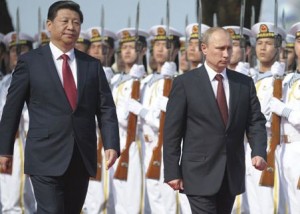 Russian President Vladimir Putin visits for two days the neighboring China to strengthen the relations at a time when Westerners accuse Moscow of the crisis that exists in Ukraine.

Russia and China want to increase their military cooperation which they considered a decisive factor for security in the world, announced today the Russian President Vladimir Putin.

In Beijing, it is expected that the Russian President sign a major contract to supply China with Russian gas for about 30,000 million cubic meters per year.

In addition, documents on global security, bilateral cooperation, energy and infrastructure have already been signed.

Coinciding with the visit, several days of maneuvers by Russian and Chinese military ships in the Eastern China Sea have initiated.