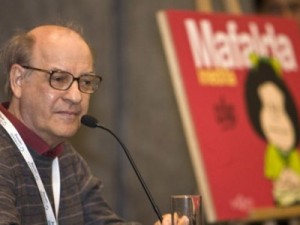 Quino, whose most famous creation is Mafalda, received the Principe de Asturias award on Wednesday

Joaquín Salvador Lavado, Argentine scriptwriter and cartoonist, better known as Quino, received on Wednesday the Prince of Asturias Award for Communication and Humanities 2014. Quino, creator of the cartoon strip Mafalda, a girl who does not like soup and is concerned for the world peace, has been awarded this year with this mention because his work contains a “huge educational value” and “universal dimension,” whose characters “transcend any geography, age and social status.”

A total of 22 candidates disputed the famous award, included: the Magnum photo agency, the communication system Skype, the Spanish biologist Francisco José Ayala, the Sevillian philosopher Emilio Lledo, among others. Quino receives this award after 50 years of his successful creation, Mafalda, which has been translated into more than 30 languages ​.

Pamela Anderson confesses that animals helped her to overcome abuse