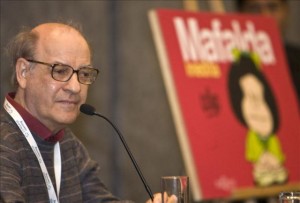 Joaquín Salvador Lavado Tejon, humorist and cartoonist, better known as Quino, was named yesterday Doctor Honoris Causa of the University of Buenos Aires. At the same event an acknowledgment diploma was awarded to the D la Flor Editions, editorial house responsible for publishing of Quino‘s work since his begginings.

Quino, 82, was born on July 17, 1932 in Mendoza, Argentina. At 18 he moved to Buenos Aires to pursue his dream of being a cartoonist. Mundo Quino was the first comic book published by him in 1963. Mafalda is the most famous character of the cartoonist.

End of Israeli occupation is demanded by Palestinian Authority president