Quito march ended in brawls between the police and demonstrators 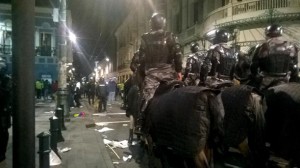 A few meters from the Carondelet Palace, violent confrontations occurred in the evening hours of July 2. Police officers and anti-regime protesters clashed after the marches of the opposition, that mobilized from the Ecuadorian Institute of Social Security and Parque del Arbolito to the center of Quito, with the support of unionists, social and medical organizations. Opponents wanted to enter the Plaza Grande where supporters of Alianza País were concentrated.

At 19:30 they managed to breach a police cordon at the Guayaquil and Espejo streets. They entered the Plaza Chica, that was surrounded by an advertising enclosure announcing the remodeling of this site. Police members had to retreat and joined the second row of soldiers who stood about 20 meters into the Espejo passageway. People used stones, sticks and iron bars to attack the policemen. Meanwhile, the police used pepper spray to ward off the tumult. Several people suffocated, others fell and were trampled by other demonstrators.

Rumor about alleged support removal from the military to the Government