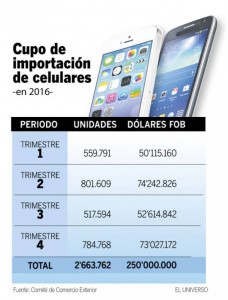 The import quota the cell phones, including smartphones, feature phones (basic) and devices for other wireless networks expanded by $ 50 million for 2016. It passes from $ 200 million in 2015 to $ 250 million in 2016 reported Foreign Trade Minister Diego Aulestia.

He also announced the new measure that allowa he purchase of a cell phone per year by any citizen through the courier services.

The Secretary of State explained that the quota (without assignment per company) will be distributed by quarters, depending on the seasonality. Thus, in December, for example, more quota will be assigned.

Additionally, the Comex lowers the CKD tariff for assemblers of cell phones in the country from 3% to 1%.

With the measure, Minister Aulestia said it is intended that cell phones can be purchased at lower prices and promote a better technological level in the country.

Javier Diaz: “The reduction in the payroll of the textile industry was between 10 and 40%”

The reserve, at its lowest point since 2012