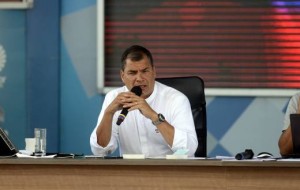 “The problem with that coward (Paez) is the fact he did NOT agreeve to meet me face to face, despite his public bluster and having `courageously´ gone for me with hundreds of people to the airport (…) It is not that I have `given up´ … Remember, the leader of the mourning movement, in addition to be a fake, is a coward,” President Rafael Correa wrote this morning on his Twitter account.

Although the president referred Wednesday he would no longer deal with the issue, today he referred again to his differences with the Assemblyman of CREO. “What citizen would not react to someone like that?” He wrote in another tweet.

The messages were the last published about Correa’s proposal to Assemblyman Andrés Páez (CREO), to meet to resolve their differences.

Although the fact drew international attention, is not the first time that the president is involved in “solving” differences “man to man,” or “face to face” with those who have criticized or insulted him.

Reforms and marches to face the ‘crisis’

Alberto Dahik: “Oil is not the cause of the crisis, but public spending”