Rafael Correa and Gustavo Jalkh are summoned in a process 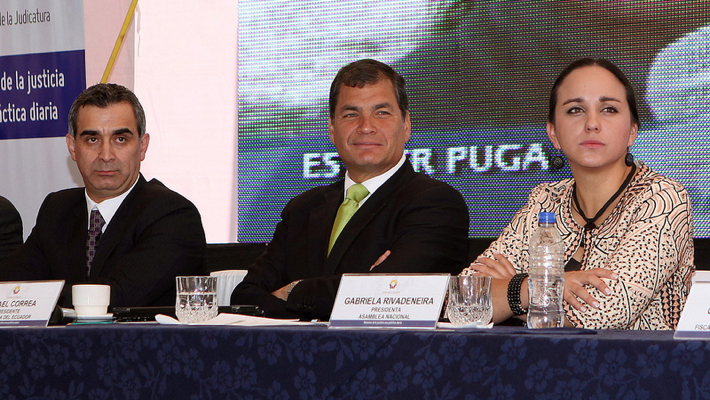 President Rafael Correa and President of the Judicial Council, Gustavo Jalkh, were summoned on October 27 to give testimony in the criminal proceedings followed in Esmeraldas for the crime of influence peddling against Homero C. and Jose A.
Both officials were summoned for the trial hearing to be held by the Court of Criminal Guarantees of Esmeraldas, tomorrow at 08:30.
Judge Freddy Caicedo signed the documents sent to Correa and Jalkh within the criminal case 08282-2016-00801.
The complaint against the defendants was brought on February 20, 2016 by Cesar Velez and Mary Colorado, parents of Paul V., sentenced to 25 years in prison, along with two others, for the murder of the mayor of Muisne (Esmeraldas) Walker Vera in May 2014.

According to the complainants, Homero C. would have indicated he could arrange the freedom of his son because he could supposedly get to Jalkh, to achieve it. The connecting bridge would have been Joseph A., who even identified himself as a godfather of Correa´s son.

The alleged perpetrators of the crime would have requested a total of $ 150,000 to process the freedom of Paul V. The money, according to the complainants, was delivered in two parts, but after a guilty verdict was given, they demanded Homero C. to return the money.
The hearing to install the Court and to start the trial stage was convened on October 26. The non-appearance of Homero C.´s lawyer and the abandonment of the defense room of Jose A. prevented it to be done.

The websites owned by media will be observed by the CNE