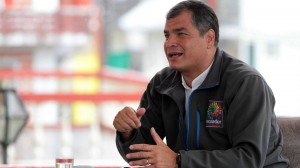 As a “big package of taxes of the citizen revolution,´ President Rafael Correa called a series of reforms in economic matters outlined in the Government Palace, in order to face a tax “hole” of $ 800 million.

The measures will imply “a little overprice” for cigarettes, alcoholic beverages and sugary drinks; in addition to adjustments to be made in the mechanisms for the allocation of resources to the autonomous governments (GAD).

With this measure revenues of $ 300 million are calculated to help overcome a “hole” in the state budget of $ 800 million, generated by lower costs in oil production.(I)

Chancellery give legal advice to the victims of OGC Paquetería