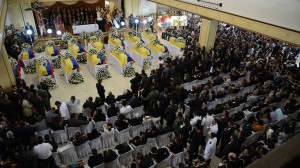 The President Rafael Correa said this Wednesday in his Twitter to pay respect to the death of the 22 soldiers who perished in the plane crash that occurred this past Tuesday in Pastaza. “They are 22 soldiers, fathers, husbands, citizens. There are dozens of widows and orphans,” he lamented.

Speaking of the two days of national mourning decreed by the tragedy, Correa asked his supporters not to perform the concentration that had been planned for this Thursday in the Plaza Grande, to protest against the bill for labor reforms.

“Out of respect for them (the dead soldiers), we ask you to suspend the concentration this Thursday,” Correa tweeted. (I)