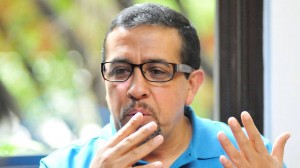 After his arrest this afternoon, retired Army Major Fidel Araujo was granted pardon by President Rafael Correa at evening.

Araujo was serving a three-year sentence, on charges of inciting the rebellion of security forces on September 30, 2010.

According to the document No. 879 signed by the president, Minister of Justice Ledy Zunigasent to the president a report which recommends that the presidential pardon is granted to Araujo. The reasons for this suggestion are not specified.