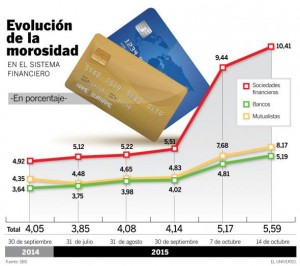 The idea of using credit to “continue subsisting,” mentioned by President Rafael Correa on Tuesday in the dialogue held with three panelists has generated a broad debate on social networks.

Close to half of the interview, conducted by Alberto Padilla, Orlando Perez and Carlos Rabascall, the president, trying to make a comparison between the improvement of national economy and the economy of Ecuadorian families, said: “Before the Government, the country was like a family living in a house made of cane, in an illegal land without education or health care for their children and in addition to this, the household head loses his job and they become poorwithout anything to eat.”

“We are now a middle-class family, with a cement house, in a legalized land, a car, children with education, health. Maybe we have a problem, maybe we are unemployed, but the household head has a credit card to continue subsisting, but the country is now on another level, ” said Correa.

For analyst Alberto Acosta Burneo, director of Weekly Analysis, the president made a comparison with the Ecuadorian economy and what he does.

Rafael Correa: “If they bother so much, I will return ‘