Rafael Correa states that the example of Fidel Castro ‘will transcend time.’ 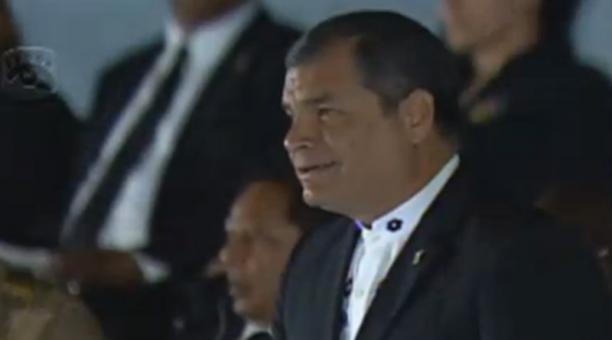 During the tribute to Fidel Castro in the Plaza de la Revolucion, in Havana, Ecuadorian President Rafael Correa said that the example of the Cuban leader “will transcend the time,” and will live throughout the American continent. Correa, who was the first foreign leader to take part in a tribute to Fidel, said that trying to “evaluate Cuba’s success or failure” under the “criminal blockade” imposed by the United States for more than 50 years is “hypocritical.”

“Any capitalist country in Latin America would have collapsed in a few months” under these circumstances, Correa said to the applause of hundreds of thousands of people at the Plaza de la Revolucion. The Ecuadorian president also strongly criticized anti-Castro groups in the United States, pointing out that Cuba “has lived a permanent war” waged by “Northern Cuba,” located in Miami (USA) against “the Cuba of the South, Free, majoritarian,” and added that “they have not invaded Cuba” thanks to the unity of the Cuban people.

Sylka Sánchez: “We will have a real oversight commission.”

New faces, two former mayors, and a former governor run for District 4 of the Guayas province