Rafael Correa: “They want to overthrow a government of inmense support” 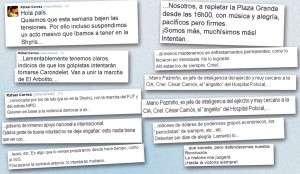 Last night the president of Ecuador, Rafael Correa, reported an alleged attempted coup to be held in the opposition marches scheduled for today.

“We have clear indications that the coup leaders attempt to take Carondelet. They will join the march of El Arbolito, convened by “los de luto” (no longer on the Shyris avenue), with the _ _ FUT and the extinct MPD marches. They wanton the basis of violence to overthrow a government of immense national and international support … this has nothing to do with laws, etc. It’s something they had been preparing for some time, as the 30-S. They failed last week, they will try tomorrow,” the president published on his Twitter account.

He also indicated they only seek to maintain permanent clashes as in Venezuela. “They will not succeed. There are the same as usual: Colonel Mario Pazmiño, former chief of Army Intelligence and very close to the CIA; Colonel Cesar Carrion, the ‘angel’ of the Police Hospital; million dollars of powerful economic groups, the same “journalists,” etc.”

Interior Minister Jose Serrano said that according to intelligence reports, it was expected they “take the Carondelet Palace by force; bring most people and distribute them on several fronts through the entrances to the Plaza Grande, forcibly breaking police fences.”