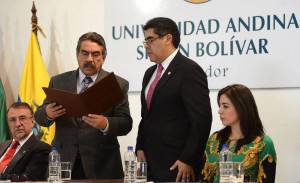 “If this university fails to comply with the Ecuadorian law, it will have to leave the country, you can take to the streets; I’d rather lose my position than allowing this insult to the Ecuadorian people.” With this warning from President Rafael Correa, the deadline imposed last Tuesday by Foreign Minister Ricardo Patiño to the Andean University Simon Bolivar (UASB), to “review” in two week the appointment of Cesar Montano as its new president, gained political momentum.

The dispute over that position began last October, when Montano -who supports former president Enrique Ayala- defeated the other candidate in a university referendum, with 87% of the votes. “Then, in November, he was formally appointed by the Superior Council of the UASB. With these credentials he took office on January 15th. The losing candidate was Raul Vallejo, former Minister of Correa, and current ambassador to Colombia.

Evo Morales complained about fuel expenditure at the CELAC Summit