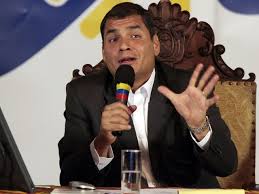 President Rafael Correa will summarize today his last year management. His report to the nation, that he will present to the National Assembly , this time will replace the Saturday’s weekly address.

The president so far has seven years and four months in power, since January 2007, with a  popularity that has always reached around an 80 %, according to surveys.

On May 24, 2013, the President took office of what he said would be his last term. He also assured he would not go on a new election and he hoped that a new face of the ruling party emerges to continue his “citizen’s revolution.”

In the Assembly this issue has been addressed. The Assemblywoman Soledad Buendía proposed this week a constitutional amendment to Articles 114 and 144, so authorities could be reelected and And the President, after four years in office could be reelected too. “My personal decision is made, but I also have a huge responsibility to ensure this political project,” said the president.