Former President Rafael Correa was found guilty of second instance bribery. Yesterday, July 20, 2020, the Court of Appeal of the National Court of Justice dismissed the lawsuit filed by his lawyers to declare him innocent and ratified the sentence of eight years in prison in the Sobornos case. 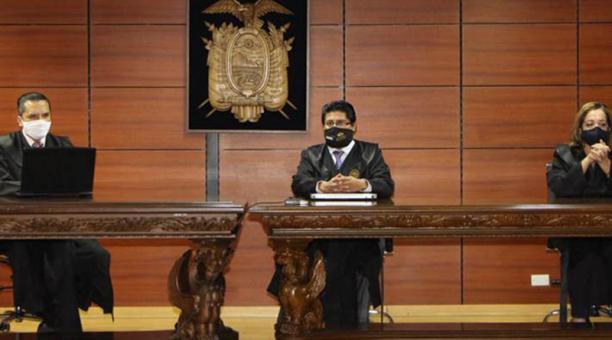 The defense of the exmandatario anticipated that he will present a cassation request, with which he will try to modify the ruling. It is the last judicial remedy before the sentence is executed (see attached infographic).

The Court’s decision was announced in a virtual hearing that began at 10:30, an hour and a half after the summons.

The delay had to do with connection problems and the license that allowed lawyers to connect to the virtual room .

After overcoming these inconveniences, the members of the Tribunal, made up of judges David Jacho , Dilza Muñoz and Wilman Terán , announced their resolution.

They discussed the theory of the case and said that the Prosecutor’s Office verified the existence of an illegal structure, led by Correa and made up of senior public officials and businessmen.

Of the 20 people who appealed the ruling, the Court partially accepted the requests of four: Alexis Mera , Walter Solís , Laura Terán and businessman Alberto Hidalgo .

However, only in the case of the latter two did the sentence change.

Terán, a former assistant to the Presidency , obtained a reduction in her sentence, as the judges recognized her contribution as an effective cooperator in the investigation. Her sentence went from 19 months and six days to three months and 12 days. Regarding Hidalgo, the Court considered that his participation in the corruption plot was not as an author but as an accomplice.

For that reason, his sentence dropped from eight years to 32 months.
His lawyer, Jorge Acosta , assured that he is not satisfied with the ruling and that he will file an appeal .

“He is innocent and we are in no way willing to allow the deprivation of liberty,” he said.

In the case of Mera and Solís, the Court accepted that the disqualification to exercise a position of popular election is not 25 years, as was established in the first instance, but eight years, the same time as the criminal sentence.
For the other accused, among them the ex-vice president Jorge Glas , María de los Ángeles Duarte , Christian Viteri, Viviana Bonilla and the businessmen, the Court confirmed his sentence of eight years in prison.

Despite the fact that none of them appealed the time of disqualification from politics, the Court’s decision on Mera and Solís also applies to this group of defendants, “because there is a principle of equality that should apply to everyone,” said María del Mar Gallegos , Mera’s lawyer. In other words, they are also prohibited from participating in politics for eight years. “Although in the case of my client, he does not plan to be a candidate for anything.”
In relation to Pamela Martínez , former adviser to Correa, the Court rejected her request for a reduction in sentence and her 32 months and 12 days in prison were confirmed.

In the final part of the proceeding, the judges resolved a request from the Office of the Attorney General . The entity requested that the Court clarify how the integral repair payment was to be made. Yesterday, the authorities indicated two amounts: the authors or co-authors must pay USD 778 224 each, while the accomplices must deliver USD 368 632 each.

Luis Ortega , Solís’ lawyer, announced that before going to the appeal he will present requests for clarification and expansion, since in the ruling there were arguments that, in his opinion, were not clear.

He assured that when the diligence began he had connection problems, since in the virtual room there were more than 200 people connected and that was why he was unable to access the enabled platform.

Álvaro Noboa announced his candidacy for the 2021 elections