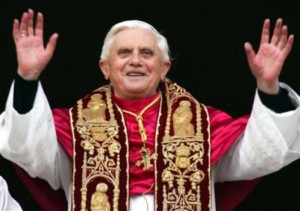 Pope Benedict XVI said in his interview with Peter Seewald—a journalist who recently published those interviews in his book “The Pope, the church and the signs of time. A conversation with Pope Benedict XVI”—that the use of condoms is justified in “some cases”.

“There could be certain justified cases, for example if a prostitute uses a condom, that could be a representation of a step toward the moral, a dose of responsibility,” said Ratzinger while talking to the journalist.

It’s imaginable that after Ratzinger’s visit to Africa, where seeing someone with AIDS is as common as seeing a kid with the flu, something must have shocked him to his very core and make his conservative self being finally get a little flexible, something made him leave behind the resounding NO he’s been trumpeting along with the catholic church all these years.

Despite this “achievement” for humanity, Ratzinger does not completely approve condoms; he claims there are other ways to prevent AIDS, such as abstention. According to the Pope, we live in a time where sexuality has become dehumanized.

Peter Seewald’s book will be on the library shelves today. Many catholics around the globe have shown partial satisfaction towards Ratzinger’s recent declaration; they consider the use of condom should be completely approved, not only in “certain situations” but in all of them—such as birth control—. However, they’ve acknowledged this as “a start”.

Fabrizio Celleri: “The most important thing in fashion is to find a style”