Reactions of opponents on surveys for the upcoming elections 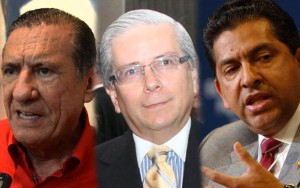 The opposition reacts with little acceptance to the stage that emerges from the Cedatos figures, which indicate that most respondents aspire to an opposition candidate as a result of primary elections.

As “a distant possibility” citizens perceive the proposal of general unity in the opposition, this was by recognized Angel Cordova, president of the Center of Studies and Data (CEDATOS), in an interview with Daily Expreso.

The main parties and movements, consulted by Daily Expreso, kept their back to the polls and discard, so far, that electoral strategy. However, they add an aspect: the unity starts to point towards the poles: the center-left, the center-right and the social collectives.

He admits his party’s will to bet on a candidate that brings together the trend. “All those who believe in the same social and economic doctrine.” Does that include CREO? Del Cioppo merely repeats the answer.

“We urge that the opposition coordinates by virtue of that 57% of citizens. That parties hear that national sentiment for change, and leave aside the personalist aspects. We urge changes. And we urge unity.”

“We believe in a unit of the center-left. But if we were a whole unit, that would be possible only on the basis of an agreement for development of the country until 2050, that details what we are going to do with the economy and politics.”
Translated into English by Pierina Abad

New march against the government but without a possibility for dialogue

The government invested $ 105.6 million in broadcasting and advertising