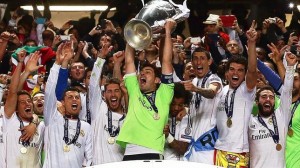 After beating Atlético 4-1 yesterday in Lisbon, Real Madrid won its tenth coveted title of European Champion. Sincé Glasgow, in 2002, Real Madrid has not played a Champions League final and did not waste the opportunity to achieve the desired’Tenth’.

Sergio Ramos’s goal forthe 1-1cameafter 93minutes, with a headed goal from the corner, and also thanks to Diego Godin, who took advantage of an error by goal keeper Iker Casillas.

The Welshman Gareth Bale, scored at 110m. With a ball pass from Argentinan Angel Di Maria, Marcelo ruled with the third goal at 118m. Later, Cristiano Ronaldo won a penalty (120m) to put the final 4-1, raising his record to 17 goals in one season of the competition.

Carlo Ancelotti got his fifth Lisbon European Cup after winning two as a player and three as a coach.

Image of Brazil before the World Cup “embarrases” Ronaldo