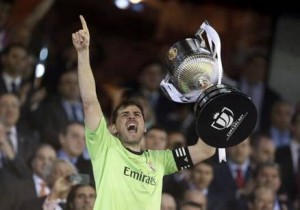 Gerardo Martino’s team failed in his attempt to lift the Copa del Rey against its biggest rival Real Madrid.

The match that was held in Valencia on Mestalla Stadium showed Real Madrid with the almost total control of the actions.

Angel Di Maria defined cross-shot and scores the 1-0 at minute 11, before a weak reaction of Juan Manuel Pinto.

Already in the second half, in the 68th minute, Marc Bartra, defeated Pepe on a corner kick and scored the 1-1 draw in the arc of Iker Casillas.

It was Gareth Bale who started from the midfield and came to the area to kill off the 2-1 in favor of Real Madrid with which a new title is awarded.

Sandra Correa requests media is included in lawsuit against Oquendo