Reforms without technical support worsen the finances of the IESS 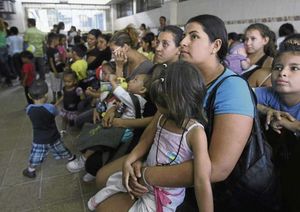 Reforms without technical support worsen the finances of the IESS

The population under Social security coverage practically tripled, going from 2.6 million in 2008 to 8 billion at the end of 2013, due to new regulations for the affiliation, listed as free technical support. This aggravated the financial situation of health insurance and, in the future, also of the pension insurance of the Ecuadorian Institute of Social Security (IESS).

Health care affiliate and retired persons, traditionally characterized by having a surplus of resources that were invested through the Bank of the IESS. But from 2011, the account that allows to cover the medical care began to record red numbers with a shortage of $ 288 million, a situation that has not yet been overcome and in the next six years, USD 2 613,1 million.

Have Included the spouses of members as beneficiaries of the IESS health coverage in the past three years. They have access to this service with a monthly contribution of 3.41%, which is deducted from the salary of the affiliate, less than that required to cover the insured health of the member (5.71%).

In August 2010, the Assembly amended the law of Social Security and increased pensions Jubilee in percentages ranging from 4.31 and 16,16%. Before, the hikes were calculated based on inflation. This, according to the actuarial report, is not sustainable, so suggested delete it, otherwise the actuarial deficit in pension would be USD 5 142 to 11 224 million by 2050.

Other decisions of the IESS also generated new pressures for these two funds, according to experts. Directory of the entity decided to make more flexible the voluntary coverage for those who do not work. This already medical examinations are not required and the age limit was removed. It also set that affiliates bring 0.10% on his salary to cover the benefits for people with disabilities. And expanded health coverage to children of members aged between 18 and 25 years, providing 1.32% of the insured salary. This last was the only change which featured actuarial studies.

“If before there were problems, the new charge could make the largest financial niche. Studies are needed”, says Manuel Vivanco, exrepresentant of the employers to the directory of the IESS. Marco Morales, exdirector of the IESS, points out that the universalization of social security is positive, but believes that the State should provide.

Former Ecuadorian Vice-Chancellor will have a job on the OAS