Rejection and support to the transfer of funds of the IESS 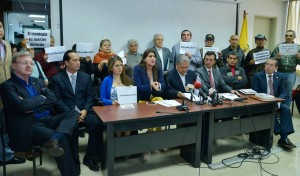 Eight external health providers of the Ecuadorian Institute of Social Security (IESS) yesterday announced their support for the decision of the Board of redistributing the contributions of workers to the health fund. Retirees, however, demand protective actions to curb that decision.

The first, led by Vladimir Almeida, described as “intelligent, necessary and patriotic” the decision of the Chairman of the Board of the IESS, Richard Espinosa, of internally redistributing the incomes of the Social Security funds, that will allow them to receive payment for their work and meet the needs of health in hospitals and private laboratories.