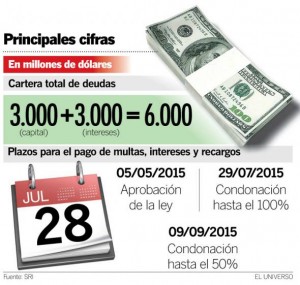 $ 764 million were raised by the remission process of interests, penalties and surcharges on tax debts, reported the director of the Internal Revenue Service, Ximena Amoroso.

The figure is higher than the planned target that was $ 500 million. She explained that during these 58 working days, since the process started, 978 000 taxpayers have benefited, being the majority natural persons. An important group was 110,000 people who are under the Ecuadorian Simplified Tax Regime (RISE) and have canceled between $ 2 and $ 200.

Amoroso said that transnational companies have injected capital from abroad in some cases.

In addition, the construction sector has performed operations for $ 17 million as part of the compensation of its tax debts. These operations were made through Central Bank Securities.