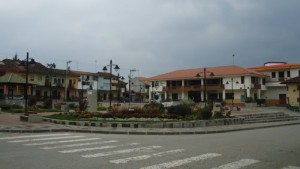 The Nabon county, in the Azuay province, receives 6.8% of remittances, according to the Central Bank of Ecuador. The money entering is invested in properties, either to live or commercial premises to generate revenues. Magaly Quezada, mayor of Nabon, says that the houses in the city are big for the family group and have 2 or 3 shops incorporated.

The purchase of homes and vehicles is very common among migrants of the Ecuadorian Austro and it can be verified at a glance. Some houses have 3 or 4 stories, are luxurious and designed to the taste of their owners.

According to Gioconda Herrera, Academic Vice President for the Latin American Faculty of Social Sciences (FLACO) and expert on migration, between 60% and 70% of the money sent home by Ecuadorians living abroad is spent on daily expenses of households, such as food, utilities and clothing.

Remittances in Ecuador continues, and even had a rise of 0.5% last year, when these reached $ 2,461.7 million, compared with $ 2,449.5 million of 2013. This after a vertiginous diminution caused by the crisis in the countries of origin of the money, especially Spain, where Ecuadorians, according to a report by the Multilateral Investment Fund (Fonim), have a share of 7.7% within the migrant population of Latin America.