Renovations on institutions begin according to the constitution 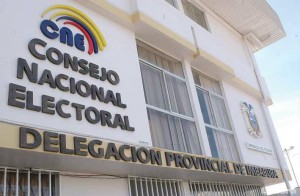 On December 17, the Citizen Selection Committee, comprised by the Participation Council, culminates the election of two members of the National Electoral Council (CNE for its Spanish acronym). Its five members took office on November 2011 and shall serve for six years, furthermore, they should be partially renewed every three years: two members on the first occasion and three in the second.

The departure of two of the current directors will be decided by a public lottery, which will be held this Thursday.

Parallel to this, the CPC launched the tender to renew the Electoral Tribunal (TCE), with the formation of citizen oversight, for which 39 people were enrolled. The registration for this culminates this Friday.

In addition, there is a pending competition. The Electoral Council is responsible for the election of the new Board of Participation, and until now, it has not called for a citizen oversight. The electoral member, Magdala Villacis, said that the plenary develops regulations and instructions to start the appointment.