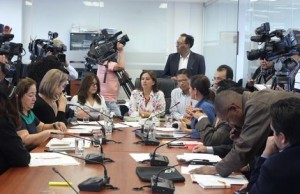 With eight votes in favor and two against, the Committee on the Rights of Workers yesterday approved the report for the second debate of the Reform Act, that seeks to transfer 54 pension funds to the management of the Bank of the Ecuadorian Institute of Social Security (Biess for its Spanish acronym).

The Commission incorporated the four conditions noted by President Rafael Correa for funds to become private: The contributions should only come from private funds and not public, that they are voluntary and not mandatory, that participants can withdraw their money whenever they require and that there is an express request of 50% of the participants requesting that their contributions remain in the private fund.

Betty Carrillo, President of the Commission, said that with the approval of the draft Law, a constitutional mandate is fulfilled, which states that pension funds with public funds must be administered by a financial institution of IESS.

Carrillo also clarified that the text provides that oversight committees are appointed by the Organic Law of Citizen Participation, “so that each fund has its overseer to guarantee the transparency, management and auditing processes”.