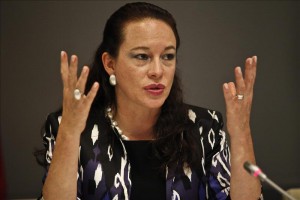 Within the framework of the ‘Second Cycle of the Periodic Review of Human Rights of the Kingdom of Sweden,’ María Fernanda Espinoza, Permanent Representative of Ecuador to the United Nations in Geneva, spoke making “several recommendations for the Swedish Government to advance in the defense and protection of human rights,” said the Ecuadorian Chancellery.

“The recommendation of the Ecuadorian government to Sweden of limiting the time of detention or equivalent situation of deprivation of liberty without charges; and also streamline mechanisms for international cooperation in the courts and prosecutions, to ensure the due process, particularly if the victim is protected by a decision of asylum or refugee status,” said the statement of the  Chancellery.

According to the Ecuadorian Ministry of Foreign Affairs, the recommendations are aimed at solving the difficulties of the Swedish system of justice that has had a negative impact on the enjoyment of fundamental rights in the case of Julian Assange, who faces an indictment for alleged sex crimes committed in European country and who faces an extradition order.

CELAC sets goal of eliminating extreme poverty in the region