Requesting asylum, the hope of Ecuadorians who migrate to the United States

With the end of Title 42, Ecuadorian migrants think they can request asylum in the United States under another immigration law called Title 8. But the reality is that most are deported for not meeting the requirements. 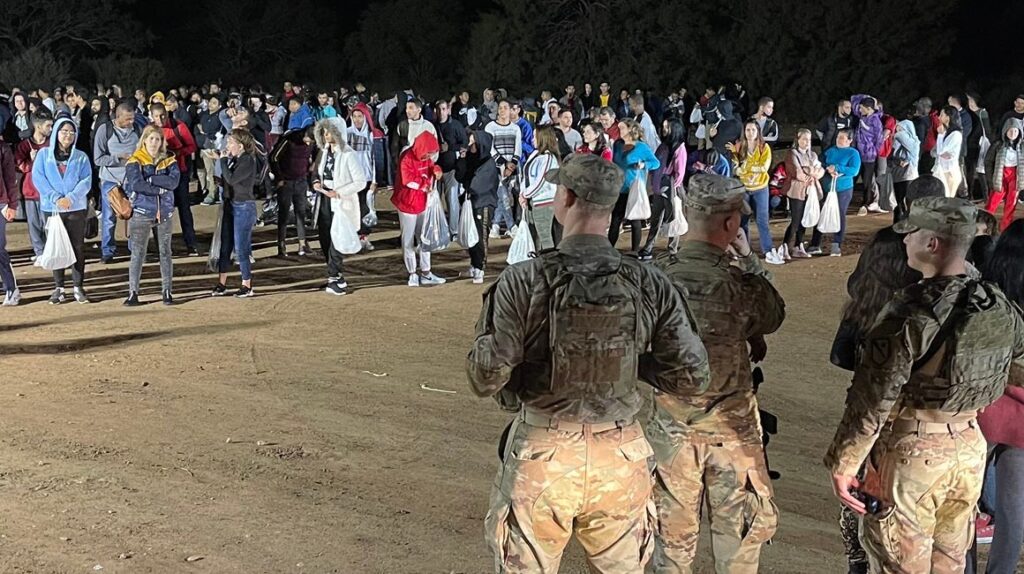 Hundreds of migrants arrive in Eagle Pass, Texas, in December 2022.

Title 8 of the United States Immigration Law will be the main tool of that country to deport migrants who try to enter the territory through irregular passages. This will occur from December 21, 2022, when Title 42 expires.

Title 42 is a health rule imposed by the Donald Trump government at the start of the coronavirus pandemic in March 2020. This has allowed the immediate expulsion of 2.5 million migrants, without giving them the opportunity to request asylum.

A few days after the end of the regulations, thousands of migrants, including Ecuadorians, have turned themselves in to the United States Border Patrol authorities.

Now they are looking to start the asylum process , one of the possibilities offered by Title 8.

This immigration law has become the last hope of Ecuadorians, in their search to live in the United States.

But most are deported for not meeting the requirements, explains William Murillo, legal adviser and director of the 1800-Migrant organization.

In the last four years, 83,468 Ecuadorians have been expelled under Title 8. The number is higher than the compatriots who left the United States under Title 42.

The change in politics in the United States occurs in the midst of a new wave of migration in Ecuador. Border Patrol data shows that in October 2022 alone, 7,077 Ecuadorians were apprehended at the border with Mexico.

The number increases despite the fact that Mexico re-established the visa for Ecuadorians in September 2022. Migrants have sought other alternatives to try to reach the US.

Lawyer Murillo, from the 1800 Migrant organization, explains that these days there is a lot of confusion about the asylum request. He clarifies that the end of Title 42 does not automatically mean that people will be able to enter the United States and stay.

For her part, the Mexican Eunice Rendón, coordinator of the Agenda Migrante organization, explained to PRIMICIAS that the migratory flow increased in recent days at the border because “traffickers make travelers believe that their entry will be easier.” after the end of Title 42.

In recent days, Rendón has visited migrant camps in various states of Mexico and verified the expectations of the people.

“People were waiting for December 21 to run to the United States because they think they are going to enter easily, but it is not like that,” he adds.

Since the night of Saturday, December 10, thousands of Central and South American migrants who remained in Mexico have crossed the Rio Grande to advance towards Eagle Pass and El Paso, on the southern border of Texas.

And over the weekend, federal agents from the United States Border Patrol have apprehended about 2,600 migrants a day and the number may rise.

The US Department of Homeland Security (DHS) expects that, as of December 21, between 9,000 and 14,000 asylum seekers will arrive in the country daily.

What does Title 8 imply?

The Secretary of Homeland Security of the United States, Alejandro N. Mayorkas, has already anticipated that they will reinforce the measures to contain the migratory wave and that they will use the powers of Title 8.

Therefore, they foresee “significant consequences” for migrants who are detained at the border.

For example, expelled persons may be subject to a five-year ban on re-entry to the United States. In addition, border agents can quickly deport people who do not have a legal basis to remain in that country.

Under Title 8, authorities must transfer people without documentation to detention centers. There they have the possibility of requesting asylum or refuge. Border agents interview migrants to determine if they are admissible.

If so, migrants must go before a specialized judge. And while their process is definitively resolved, they will be admitted to the United States with certain temporary benefits.

Murillo explains that the main reasons why Ecuadorians and other citizens can request asylum are: race, religion, nationality, belonging to a particular social group, victims of violence , among others.

But migrants must prove that there is a real fear or a fundamental reason for not returning to their country.

President Lasso will meet with Joe Biden in Washington

Good news! They found hatchlings and juveniles of pink iguanas in Galapagos