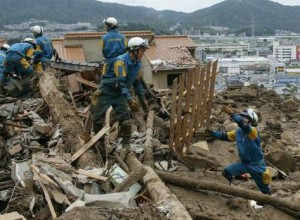 After the landslides that occurred more than a week ago in this city of southwestern Japan, ten people were still not yet be found this Thursday morning in Hiroshima, where at least 72 died because of the fact.

According to police, more than 60% of the victims died of asphyxiation, surprised while they slept by avalanches of mud and rock that buried and dragged their homes.

Hopes of finding survivors are considered invalid and the search reveals itself very complicated, because some bodies could be dragged away from where the disaster occurred, according to rescue services.

The most affected districts are Asaminami and Asakita, in the north of Hiroshima, which were evacuated.

About 50 rockslides and mud occurred last week in middle of the night (local 03H00), according to aerial surveys conducted by Japan’s Geospatial Information Authority.

Experimental Ebola vaccine will be tested in humans