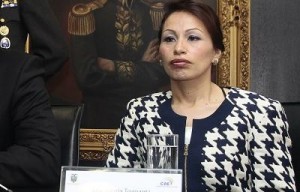 The resignation of Gloria Toapanta, one of the winners of the selection process in the Council of Citizen Participation, surprised the members of the National Electoral Council (CNE for its Spanish acronym), as she remained only six days in office.

The argument was “personal reasons.” The letter arrived at 18:00 on Wednesday, and a copy was sent to the President of the National Assembly, Gabriela Rivadeneira.

At early hours of January 15 the news it became public and, around 11:30, Solanda Goyes, first alternate member,also appointed by the Council contest Citizen Participation (Cpccs), came into the scene.

Bilateral definitive ceasefire is welcomed with “satisfaction” by FARC