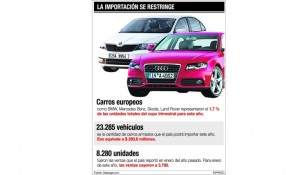 Restrictions on the import of vehicles cause their first international complaint. The European Union is concerned that the automotive sector cannot keep importing vehicles.

Through a letter sent on this March 4th, Peter Schwaiger, who in charge of Business in 28 countries, claimed that European importers will be affected. The letter, sent to the Coordinating Minister of Production, Vinicio Alvarado, explained that “the system of vehicle import is not compatible with the obligations contracted with the OMC (Global Commerce Organization), among other international treaties with Europe. Treaties that will be void then the new law is finally set”. (I)

Rafael Correa says that Lula will win against “this new villainy “